The input is supplied to stdin in a comma-separated format:

You can provide one game per line or have rounds between two users already accumulated.

It is important to end with a new line, otherwise the last line is ignored

It returns the user ID and its calculated rating as in user,rating per line.

The ranking system relies on rounds won and doesn’t care about games. You can have even drawn games. \

There are multiple environment variables to tweak the execution:

The detailed configuration of each of these settings can be understood by reading on.

An original implementation has been as part of Worms League. It was battle-tested and performed convincingly.

Now there is a self-contained CLI application written in Go. This application should allow for usage outside of Worms League or any particular league so that it can supplied only with the games that were played and then output the ranking.

Go is also faster than PHP and a better suit for a standalone CLI application.

In the public world one is accustomed to absolute ranking system. These are self-contained perfect. Everyone plays everyone the same amount of times. Therefore there’s no need in complexity to assess a points pattern other than addition. The fixtures are inherently perfect.

This is not typically the case in online games where there’s a fixed schedule and not everyone is necessarily playing everyone the same amount of times. So players may never clash, others multiple times. An absolute ranking would make players end up top who win most of their games. In other words, possibly the most active or the one playing the weakest players.

Therefore the series of a user has to be evaluated within a context that’s relative to all the other contenders in.

The most blatant example is a victory against a higher ranked other player should get one more points than against a lower ranked player.

The most fundamental information that an absolute ranking could be generated from is the total won rounds. One gets one point per won round.

This is now an absolute state. The idea of the relative ranking system is to put this absolute rating of each players into perspective — into context.

Looking at the number of won rounds of each player under which circumstances were they actually attained?
One is more likely to add won rounds based on these factors:

These three factors are relative among themselves again. For instance the more number of rounds against the same opponent of a weaker skill level, the more likely one is to gain won rounds and vice versa.
If one is generally playing more rounds, it’s more likely to accumulate won rounds, too.

These are the three main factors used in the relative ranking system. These can be referenced to put the absolute value of won rounds into a context. Therefore they relativize an absolute number and are thus called “relativizers.”

The quality relativizer relativizes won rounds in the context of how well the opponents of that user are rated. This is perhaps the most obvious relativizer valuing won rounds according to the rating of the respective opponent.

This is averaged so that number of rounds per opponent are accounted for proportionally.

Here is the opponent’s position to relativization plot for a total of $n=16$ distinct ratings. 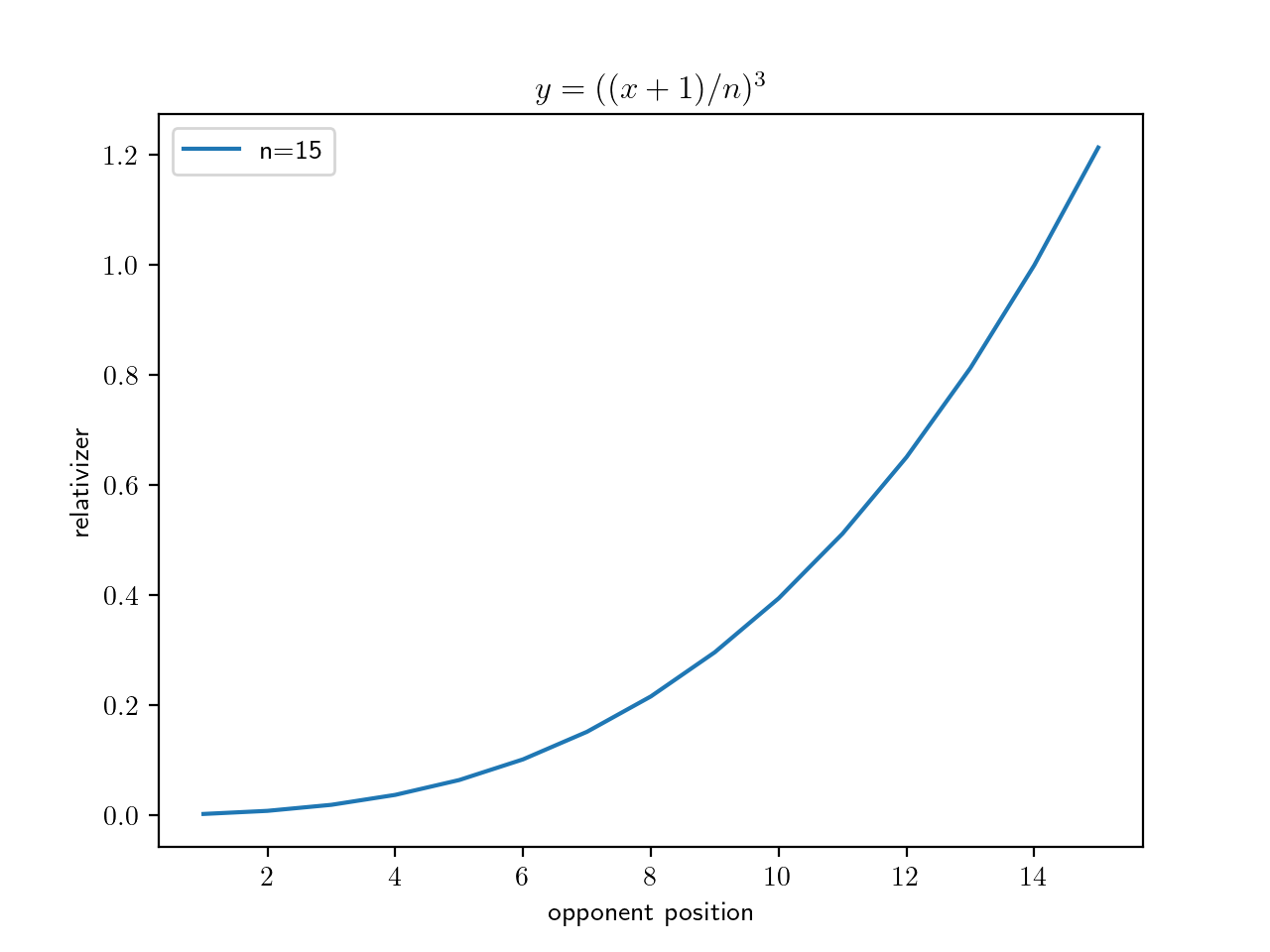 The highest rated player — being at position 16 in $n$ — is worth a 100 percent so that the result for $max(n)$ is always $1$. Won rounds are exponentially less relativized the higher the opponent is rated.

Exponential makes sense here because ratings for players at the top tend to be more robust. For example the difference in skill of a player is likely to be greater between first and third place than it is for 20th and 23rd.

The farming relativizer relativizes won rounds in the context of how often that user played against the same opponent. Each won round weighing less than the previous. This retaliates the infamous “noob bashing” where a better player repeatedly defeats a very low rated player to farm points from.

Additionally this promotes users to have diverse pairings. Certainly a user’s rating is easier to assess the more data is available.
Theoretically you can gain more points from defeating a low rated player for the first time than gaining a hundredth won round against a high rated player.

The relativizer is made so that per opponent the first round is always worth $1$ as in 100 percent. Then the value of each next won round decreases logarithmically. The logarithm is negative natural. It decreases until $0.01$ which is the least value a round can have as per the farming relativizer. It is given to the round of the maximum won rounds any player has against another. This value is $a$.

This is the important concept here. Scaling the value of won rounds from $1$ to $0.01$ negatively logarithmically.

Starting with the fundamental logarithmic function: 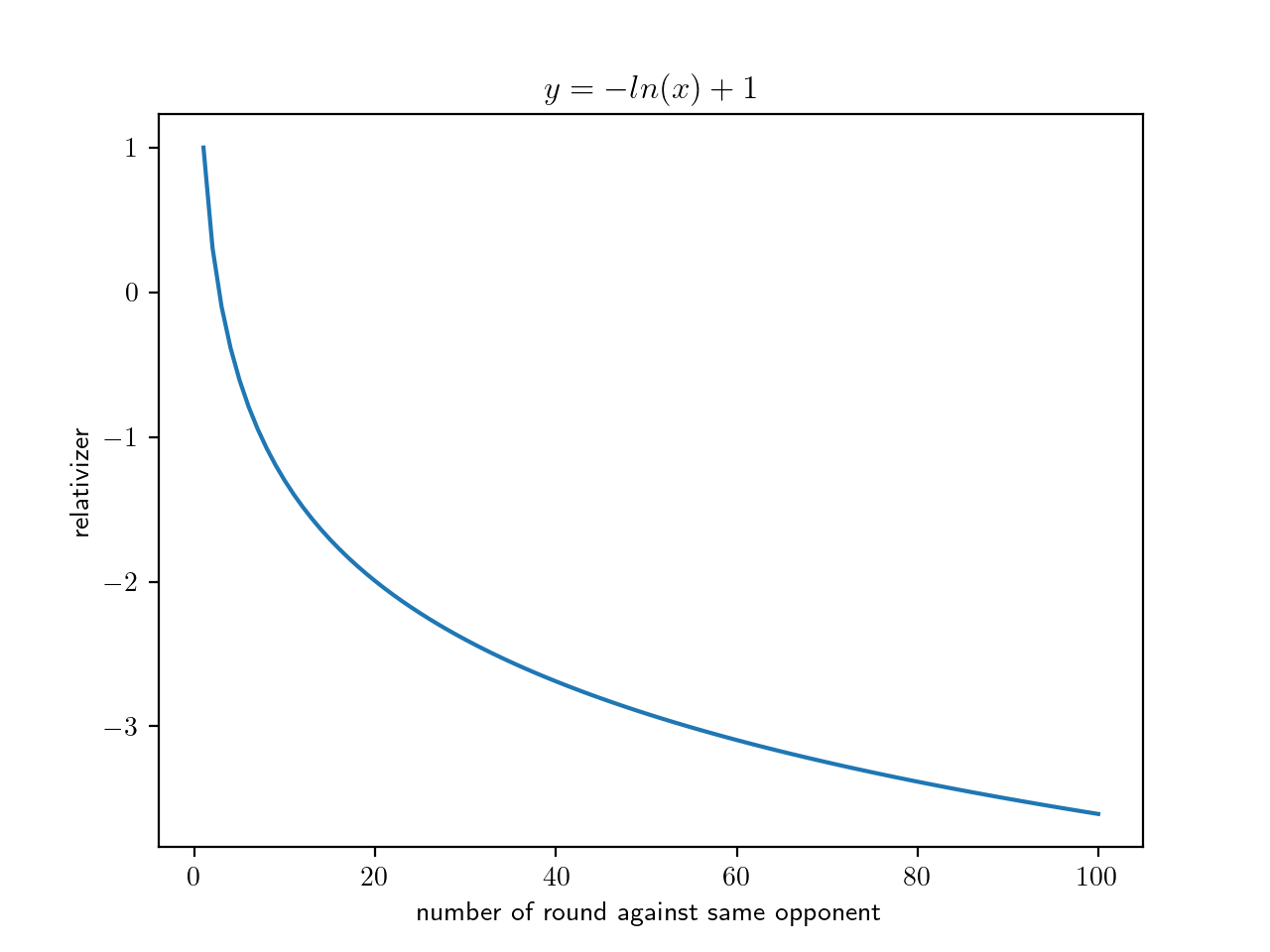 The boundaries are for the first round

and maximum round respectively

with everything in between decreasing towars $0.01$ logarithmically. 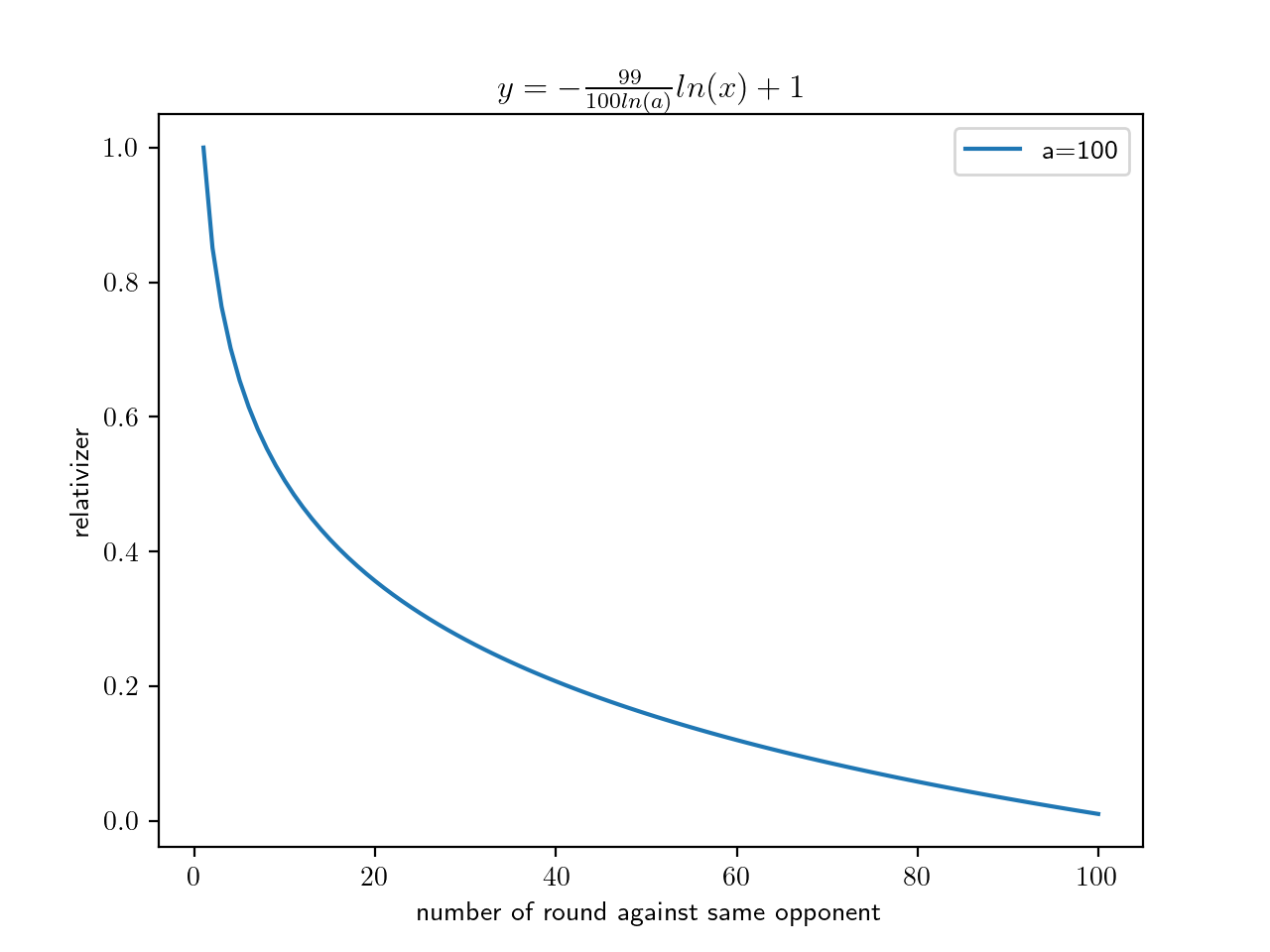 This formula is applied to each round per opponent so that $x$ is a set where each number represents the $n$-th won round.

This is then averaged across the total number of won rounds. The final formula to output the factor of relativization:

Each calculation of a relative ranking starts with an absolute ranking. They’re put into relation using relativizers.

Since two perspectives — an absolute and a relative — are put against each other, it is necessary to balance them out.

The more relativity is “applied” to the absolute information, the less the original absolute value has any weight in the final outcome. Potentially leading to an entirely unfounded result as the relativization process to relativize itself more and more.

The relative ranking system applies relativization steps. With each new step the previous value is relativized further. Each output is the input of the next step. As aforementioned the initial input is the absolute value of won rounds.

Each step is the same relativization algorithm applied to the input.

relSteps is used in a formula to determine the total number of relativization steps.
Consider $a$ to be relSteps and $x$ is the maximum total number of steps played of any user.

S is solved for the number of relativization steps to take.

Assuming relSteps is $36$, it would generate the following relativization steps per maximum rounds played of any user. 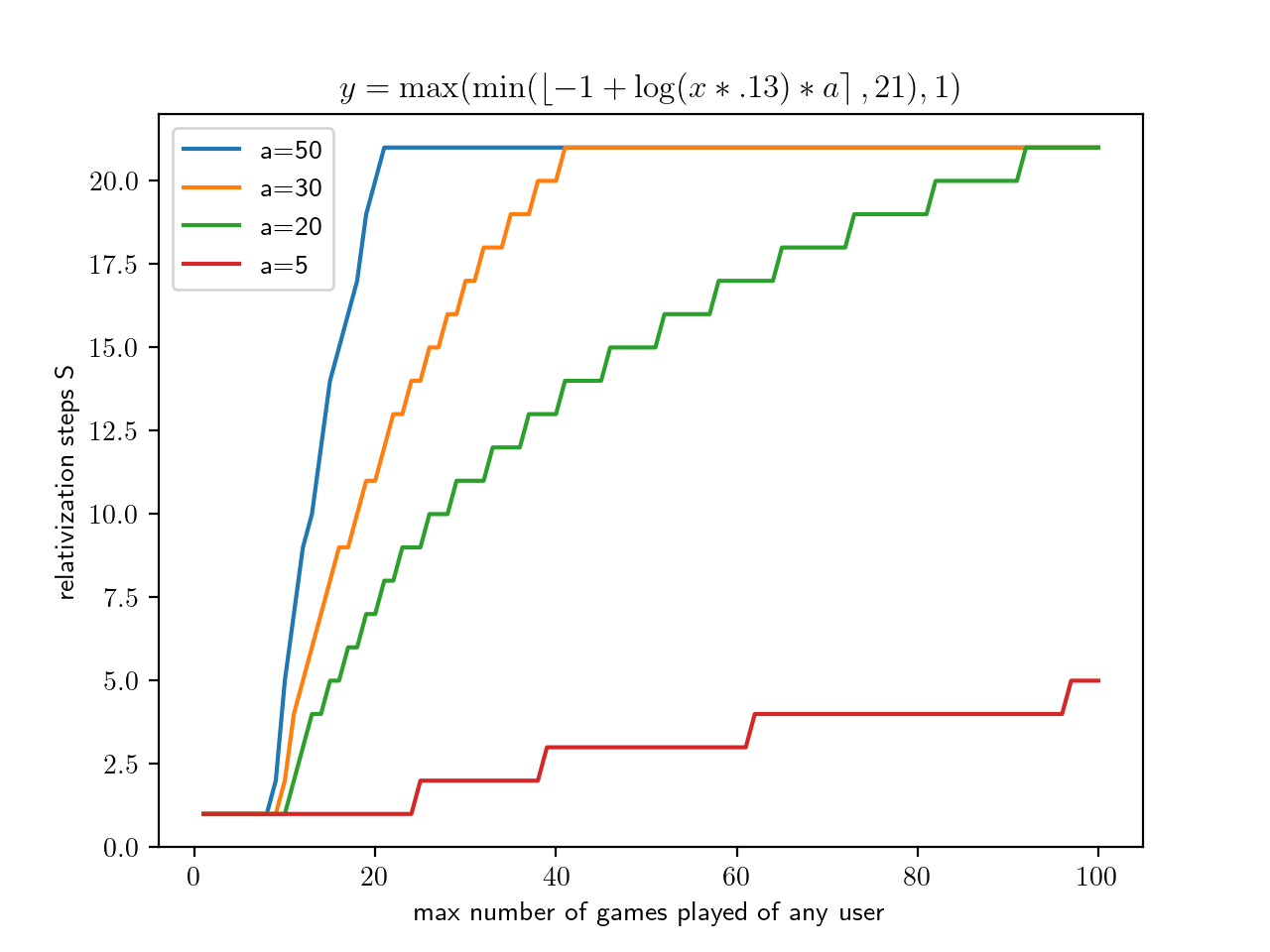 There has got to be at least one relativization step and $21$ at most. The result is rounded down.

$20$ for the $relSteps$ parameter and maxing out at $21$ have proven to deliver the best results. More on that later.

relRel is used in a formula to influence the impact of each individual relativization step.

In other words: Prior to any relativization, the rating of a user is simply that user’s won rounds, in all subsequent steps it is the relativization result of the previous step. In the first step the won rounds are relativized and that result is to be relativized in the next step and so on and so forth.

In that example the three won rounds of a user are passed through four relativization steps determining the final rating of the user.

Here relRel configuration comes into play. It is added to the relativization and then the average of these result in the final relativization.

In practice the average of three relativizers (as mentioned earlier) and relRel form the final decimal that the rating of the current step is relativized by.

Therefore within reach step the rating of the previous round is multiplied by the average of all the relativizers including relRel to form the new rating which is the final rating depending on whether all steps have completed.

The algorithm produces rather insane numbers. For example a user with $163$ rounds played total of which are $127$ won could potentially end up with a rating of

and even more decimal places depending on the scale that is set for decimals.

To make the numbers more pleasing for displaying to the end-user in a ladder the numbers can be rescaled using min-max normalization.

To make numbers increase as more rounds are played one can make $b$ the maximum number of rounds of any player. This adds to points being more relatable over time.

In the relative ranking system everyone’s points may change with just one new round played.

The maximum rating of a use according to which to scale all other users’ points can be set with the RELRANK_SCALE_MAX environment variable.

The algorithm is tested against another ranking system that is regarded as the best in Worms Armageddon online play.

Many of the magic numbers in the formulas provided in this documentation originate from experimentation to drive down the root mean-squared error toward that target system.

This metric is interesting and human-readable. This is the average difference of a user’s rating compared to the target system.

This metric isn’t really human-readable because like mean absolute error but it’s defining metric to measure how well the algorithm performs.
The edge it has over MAE that due to it weighs big differences heavier than small ones.

There is testing in place making sure RMSE doesn’t increase.

Tests are run by the validate.py script.

Note that the number of games played per season is very different. Seasons with many games played generally have greater ratings and lead to greater MAE and RMSE.